Yesterday I spent the day in prayer in Prime Minister Malcolm Turnbull’s office. Along with my companions I refused to leave, unless we had an assurance from the Prime Minister that the detention centres in Nauru and Manus Island would be closed, and those held within them brought to Australia. We spent five hours in prayer and yearning.

As the office closing time came close we shared in communion together. As police began to gather around us, we sang and prayed, read excerpts from the Nauru Files, and heard the story of a Messiah crucified between two thieves. We gave thanks for a God who never holds creation at arm’s length but is present in the darkest places.

And we broke bread together.

This is the body of Christ shed for you.

This is the blood of Christ poured out for you.

Receive what you are, become what you receive: the Body of Christ.

If there was ever a place to be turned upside down it is at this table, this meal, this meeting with God. Here is God’s companionship with the world: broken and transformed. Here is God’s love for the world sewn deep into the fabric of God’s body.

One incident from the Nauru Files which we read has immersed itself within me:

ON MORNING BUS RUN[REDACTED] SHOWED ME A HEART HE HAD SEWN INTO HIS HAND USING A NEEDLE AND THREAD. I ASKED WHY AND HE SAID “I DON’T KNOW”. I NOTIFIED [REDACTED] AS SOON AS I GOT OFF THE BUS AT OPC1 AND SHE PROCEEDED TO TAKE[REDACTED] TO IHMS. [REDACTED] IS [REDACTED] YRS OF AGE. 25th MAY 2015

I imagine this boy. In my mind he is about 10 years old. 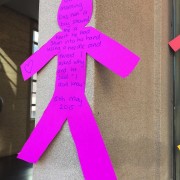 He shows me his hand, palms outstretched as though pleading, beckoning to me.

Look, his eyes speak. I have written love onto my hands. I have scratched it in, sewn it deeply. I ask him why, but he simply shakes his head, eyes full of sorrow.

He does not know.

This boy has marked himself for the love that has eluded him. He has not been welcomed to table, he has not found sanctuary, no hope has been held out for him. The thread pierces my heart.

Before my eyes this small boy is transformed, and I see in him the Christ at whose table I sit. It is as though I am in the place of Thomas, reaching out to touch the sewn-heart scars in his hands.

Does it hurt? I dare to ask.

Yes. He replies. These scars hold all the pain of the world.

I want to take him in my arms and hold him. I want to tell him that everything will be alright.

But it isn’t alright. It isn’t ok. And it won’t be until love is sewn into our hands more deeply than with thread.